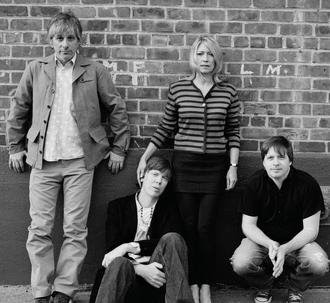 I have written on these pages before about my love of both Sonic Youth and The Wire magazine. But I have to be honest, I found myself bristling when I got Issue #295. No less than three Sonic Youth books were being reviewer, and they were all slated by the reviewed David Keenan, a writer I normally have a lot of respect for. Keenan’s attitude is best summed up here: ‘Who are all of these people who go to sellout Sonic Youth shows and yet never pick up a record on Thurston Moore’s Ecstatic Peace label or even know any Sonic Youth albums pre-Daydream Nation?

Actually, I have investigated and bought Sonic Youth albums pre-Daydream Nation, and I do have stuff released on Ecstatic Peace. But I’m not happy with the idea of people being looked down on because they don’t.

To be fair to David Keenan, he obviously really knows his Sonic Youth inside out. And that includes all the side projects, the releases they have done on the SYR records, the solo albums and the collaborations, be they with Lydia Lunch, Jim O’Rourke or Merzbow. This needs documenting, and I’m still learning. But is it really fair to turn your nose up at the people who came to Sonic Youth via seeing them on Lollapolooza, MTV’s 120 Minutes or Alternative Nation, or hearing them in Juno? Whilst it’s one thing to feel that a book isn’t properly researched, it’s quite another to be snobby about it. Courtney Love once commented that the problem with Alternative Rock was that it was riddled with middle-class snobbery and she is absolutely right. And this extends, most definitely to notions of the avant-garde.

I first heard Sonic Youth in late 1990, when a friend played me Goo. This did lead to me investigating their back catalogue. I have to put my hand up and say that I have only seen them live once. Sometimes geography can be a real barrier, as can money and oh yes, a day job. But if someone hones in on Sonic Youth because of hearing their cover version of the Carpenters’ ‘Superstar’ why is that less worthy? There will be people whose epiphany moments will come as a result of those moments in High Fidelity, Garden State or Juno. Does this make them less adequate fans?

There have been lots of side projects, and I cannot write about them all here because I do not consider myself qualified to do so. As Ciccone Youth they recorded cover versions of Madonna’s Burning Up and Into The Groove(y) (sic), and Robert Palmer’s ‘Addicted To Love’ working with Dinosaur Jr’s J Mascis and the Minutemen’s Mike Watt. I treasure my Sonic Youth/Mudhoney split single where they cover each other’s songs. But I don’t think the less of someone who still thinks that Dirty is a better album than Bad Moon Rising.

Some of the side projects can be disorientating. The collaboration beween Thurston Moore, Evan Parker and Walter Prati, The Promise, can seem like a bewildering listen. I know many felt completely freaked out by the Goodbye 20th Century SYR release. I like the ‘J’accuse Ted Hughes’ release from earlier this year, but this isn’t for everyone. Other projects, like Thurston Moore’s solo album from last year Trees Outside The Academy or Kim Gordon’s ongoing side-project Free Kitten are more, dare I say it, accessible. That doesn’t mean that they’re boring or lack experimentation, it’s just that they’re easier to listen to and get into.

I somehow doubt that Sonic Youth sit there worrying, anyway. Over the course of more than half a century, they’ve ploughed their own furrow. this year, they have released a best-of through Starbucks music, and then announced that they’re signing to Matador. Perverse buggers.

and just to prove that I do know something of Sonic Youth away from their more mainstream stuff, Mr. Keenan…

From last year’s Trees Outside The Academy

[Oh, these last two tracks are from the Ecstatic Peace label. There now, we can all share!]

From the aforementioned Thurston Moore, Evan Parker and Walter Prati release The Promise