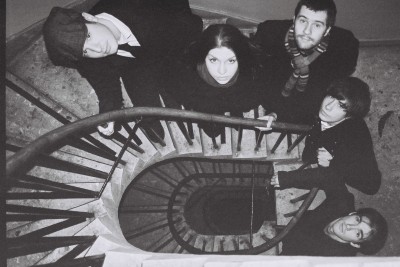 Edinburgh five-piece Letters have certainly got parts of the blogosphere in a tizzy already.

They are: Mikey Ferguson (Lead Vocals/guitar), Georgie Williamson (Cello/Vocals), Kerr Donaldson (Drums), Dougie Fuller (Bass) and Ed Ellis (Guitar, Vocals). They just released their first, free-download only single ‘Grand National/Pipe Dreams’ last week. The Pop Cop declared them ‘the hottest new band in Scotland’ on his blog, before they’d played a gig. Their debut gig was the launch for the free single, which saw them supporting the Last Battle at Henry’s Cellar Bar (a great night, by the way!). They’ve also been championed over at Kowalskiy, for whom they gave this rather tongue-in-cheek interview. This single is certainly an excellent starting point.

There is a physical EP following in April. They support Wild Palms on March 4 at King Tut’s, Glasgow.

Let me know what you think…