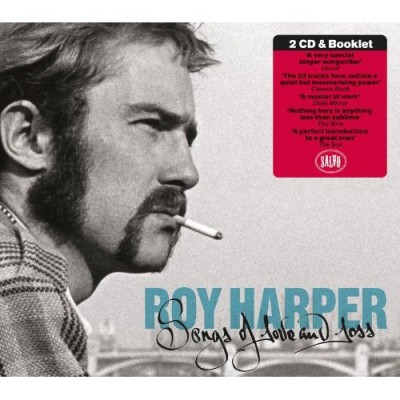 Let’s start off by making something clear. Firstly, this is a compilation. However it is not intended to serve as an overview to the entirety of Roy Harper’s Forty-year plus career, but rather to focus on the love songs and laments he has recorded. So: no, there is no ‘When An Old Cricketer Leaves The Crease,’ no versions of ‘Have A Cigar’ and nothing off Stormcock.

I should emphasise that this is not to criticise this compilation for a lack of those; on the contrary, it serves as a reminder of just part of the ouevre of Roy Harper. Because if you haven’t heard some of – God forbid -ANY of the songs on this compilation, you need these songs in your life, and this compilation is as good a place to start as any.

I first heard ‘Another Day’ as covered by This Mortal Coil, which was a beautiful version, but not as mind-blowing as the original. ‘South Africa’ was written at the height of Apartheid; with the benefit of hindsight it is possible to see how far the country has come and how far it has still to go. There’s also ‘All You Need Is’ – one of the most perfect love songs ever written, his version of the traditional ‘North Country…’

Yes, I’m a fan of Roy Harper. Thing is, I came to his work quite late on, and I’m happily making up for lost time. The great man celebrates his seventieth birthday this year -and these 23 tracks stand as a monument to just part of his undisputible genius.

Songs Of Love and Loss is out now on Science Friction/Union Square. This is part of the re-issue programme and more reviews will follow here shortly.