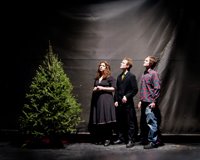 Low. That’s right. There are people in this world who haven’t, and hungover as I am this Saturday morning (no-one to blame but myself) I decided that I wanted to make this post for these people. If you are already familiar with Low- I salute you.

Most people know ‘that’ feeling, when they hear a band and they realise that this is something truly, truly special. I don’t know, though, that it’s always the first time you hear a band. Back in 2000, in the Rough Trade Shop in Covent Garden, I picked up Low’s Christmas album, because I liked what I had heard, and I had read about it, and I also picked up the ‘Dinosaur Act’ 7″ that was new out. Two great records BUT the moment of revelation came a couple of months later when I heard ‘Sunflower’ on John Peel. ‘Sadcore?’ Whatever. This is one of the most heartbreaking songs ever released, yet life-affirming at the same time. I had to buy Things We Lost In The Fire.

This of course led me to other albums. About six months later their collaboration with Dirty 3, In a Fishtank 7 came out. Worth it for the cover of Neil Young’s Down By the River alone.

I heard Secret Name and the following year they put out Trust. They came and played in Edinburgh in February 2003, which was an amazing show. I remember walking out into one of the coldest nights I have ever felt. Somehow, it felt apt. This track is from Secret Name:

Their box set, A Lifetime of Temporary Relief is also essential, partly because it contains this gem that they put out as a 7″ for the mighty Sub Pop

2005 saw the release of The Great Destroyer which showed almost a rocky Low. Here are the two opening tracks – go get ’em!