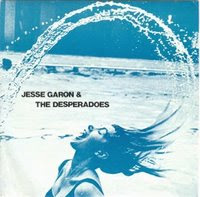 A legendary scottish band kick off this new series on 17 Seconds.

Jesse Garon and the Desperadoes were a legendary scottish band, that also had links with The Fizzbombs, Rote Kapelle, Meat Whiplash and the Shop Assistants. (Michael Kerr of Meat Whiplash who was the guitarist at one point, would leave to join the Darling Buds on tour in 1989). The original lineup was:

Jesse Garon and the Desperadoes – ‘Splashing Along.’ mp3

The band recorded a handful of singles, released a compilation of them entitled A Cabinet Of Curiosities. In 1990 they caused controversy with their single Grand Hotel, which referenced the IRA bombing of the Grand Hotel in Brighton in 1984 where the Conservative Party Conference was held that year. Andrew Tully described this as ‘a ‘fuck Thatcher and fuck the IRA for not killing her when they had the chance’ song.’ That year they released the album Nixon, a mini-set entitled Hold Me Now and then split.

The video for Grand Hotel:

Subsequently, Andrew Tully runs Avalanche records, a fantastic shop in Edinburgh. He’s still there, and DJs around town. [He recently told me a highly amusing anecdote involving a legendary Radio 1 DJ much written about on these pages and We’ve Got A Fuzzbox And We’re Gonna Use It] which I won’t repeat here for fear of being sued. According to him, Margarita is now an artist living in Spain. She also drummed for the reformed Shop Assistants on the ‘Here It Comes’ and ‘Big ‘E’ Power’ singles in 1990 -that’s the subject of another post on this blog.

Jesse garon and the Desperadoes on tweenet

Avalanche’s mySpace is here. Due to the fact that you cannot buy Jesse garon and the Desperadoes back catalogue in many places, here is a really great place to start.