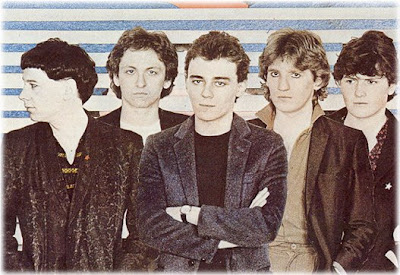 They may have receievd a lot of flack over the years (a fair bit of which is almost certainly tall poppy syndrome), but I think it’s time for people to embrace the music of early Simple Minds. Rather like with Roxy Music, the early stuff was genuinely pioneering, and has dated much better than some of the later stuff. And controversial though this may be for some, I think they were far more pioneering in their early days than U2, with whom they were always compared. They didn’t want to be considered Jockrock and the song titles reflected an interest far more in tune with Warhol and European culture.

Take the two early tracks ‘I Travel’ and ‘Theme For Great Cities.’ To me they still sound utterly fresh now.

This track hints at what was to come later…but also shows that several albums in, they hadn’t compromised.

In 1982, they broke through commercially with the album New Gold Dream (81-82-83-84) and attendant hits like ‘Promised you A Miracle.’ There were celebrity marriages for singer Jim Kerr (to both Chrissie Hynde and Patsy Kensit), a US no.1 single, and huge, massive gigs. An increasing bombasticness alientated old fans, but there were some utter gems later too:

This was the first time I ever saw Simple Minds’ music on TV, this made it into the UK charts in late 1986. Their manager of the time, Bruce Findlay, has said that this is a re-write of ‘I Travel.’

Please do yourselves a favour: listen to the early albums: Life In A Day, Reel To Reel Cacophony, Empires And Dance, Sons and Fascination, Sisters Feeling Call. You can almost certainly pick these up very cheaply. Simple Minds are still recording and touring. Their manager of the eighties, Bruce Findlay now manages Aberfeldy and reads this blog, too…

A link to lots of Simple Minds videos on youTube