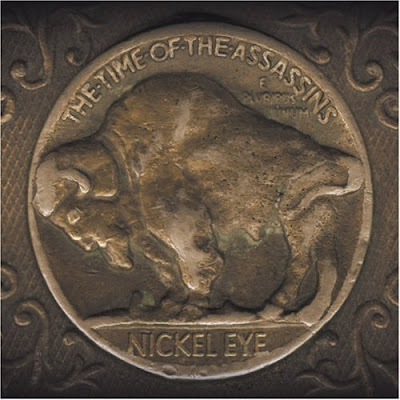 Nickel Eye – ‘The Time Of the Assassins’ (Ryko)

Nickel Eye is Nikolai (say Nickel Eye out loud, then cringe) Fraiture of The Strokes’ solo project. With the Strokes seemingly still on hiatus, he came to England and recorded an album of his own. Including guest appearances from Nick Zinner (of the Yeah Yeah Yeahs, talking of bands who we are due another album from) and Regina Spektor. So far, so good…

..Unfortunately, his backing band are South, who have well and truly jumped the shark. Added to which, most of the songs feel like badly recorded Strokes songs and Fraiture’s voice is completely lacking in charisma. The best track ‘Hey, That’s No Way To Say Goodbye’ is of course, a Leonard Cohen cover. At least he didn’t opt to do ‘Hallelujah.’

It’s not an awful album, but it’s just utterly dull and boring.

The Time Of The Assassins is released on January 26 on Ryko.