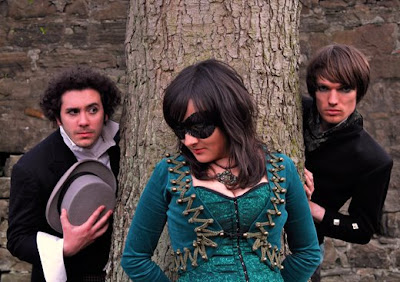 It’s a great pleasure to have the amplifico debut album in my hand. Having seen Donna Maciocia support Aberfeldy last year and blogged enthusiastically about them here, I can only imagine how great it feels for them, given that the album was partly funded by individual donation and a webathon fundraiser gig.

So, people keep comparing her to KT Tunstall (well, they’re both female and from Fife, Scotland, but it kind of stops there) and I wish these comparisons would stop because a) it’s lazy and b) it’s not terribly accurate. Donna’s got a gorgeous smokey voice and a unique style of keyboard playing that means there aren’t many to compare these songs to. ‘Yeah you Can be My Muse’ and ‘Baby Baby’ blew me away from the stage and they continue to do so here. With bandmates Ross Kilgour and Dave Brunton, this album shows that the waiting was worth it and the promise delivered. 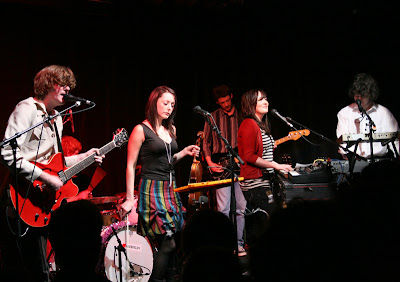 Support act tonight is Donna Maciocia from Amplifico, who plays a solo set on her own, with support from assorted members of the Feldy (the other Amplifico members are in Australia and Canada, apparently). I was wowed by Amplifico the last time I saw them (which was also supporting Aberfeldy) but tonight Donna leaves me delightfully stunned. Songs like ‘You Could Be My Muse’ ‘This stuff Cuts Like Thorns’ and ‘Baby Baby’ are just gorgeous. As is her cover of Bjork’s Who Is It? (from Medulla). For ‘The comedy stops Here’ she is joined by Chris and Vicky from Aberfeldy. Aberfedly’s Murray joins on sleigh bells for her cover of ‘All I Want For Christmas Is You’ which beats Mariah Carey’s version hands down. and I bet Mariah can’t play the ukelele either, nor loop her voice at the end for the coda. I can’t wait for Amplifico’s album, due out in March.

Aberfeldy are on fire tonight. It’s the ninth time I’ve seen them and they are amazing. Both tonight and the previous night are sell out gigs, and deservedly so. They are greeted warmly when they come on, and open with two new songs, ‘In Denial’ and ‘Malcolm,’ the latter which features a delightful array of fish puns (yes, you did read that right). These two songs have a country feel to them. As well as the fish puns, part of the fun lies in spotting the songs that are referenced (I count Crosby Stills Nash and Young’s ‘Our House’, the Velvet Underground’s ‘I’m Waiting For My Man,’ The Beatles’ ‘Nowhere Man’ and Dylan’s ‘Mr. Tambourine Man.’). Donna comes onstage to join them on xylophone for a countryish take on ‘A Friend Like You.’ We get ‘Uptight’ and ‘1970s’ from Do Whatever Turns You On, perhaps the most underrated album of the decade, and ‘Love Is An Arrow.’ We then get three new songs ‘Rock ‘n’ Roll’ ‘Talk Me Round’ and ‘Somewhere To Jump From.’ It’s testament to just how great Aberfeldy are now that they can play three new songs in a row and the crowd still love them, as playing new stuff – which by definition most people won’t have heard, and thus takes people outside their comfort zones – can be hugely risky. ‘Something I Must Tell You’ and ‘Do Whatever Turns You On’ remind us of just what pearls the back catalogue contains, as if we could be foolish enough to forget. Next single ‘Claire’ (Rough Trade mshould be kicking themselves for letting Aberfeldy go) is followed by gorgeous versions of ‘Hypnotised’ and debut single ‘Vegetarian Restaurant’ and the sixth new song ‘Wendys When I’m Wasted.’ They finish with a storming version of ‘Heliopolis By Night’ complete with the Radio GaGa-style handclaps.

I worked out that this is the 26th gig I’ve been to this year, including instores, and frankly, by far and away the best gig I’ve seen this year. There’s lots of new releases I’m looking forward to in 2008, including Foals, Sons & daughters and British Sea Power. But at the top of that list is the third album from Aberfeldy. 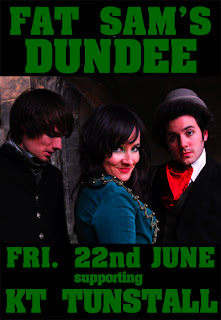 I had intended to post a review of the gig I went to last night, which was Aberfeldy in Edinburgh. However, due to the fact that the soundchecking had taken ages along the line somewhere, the band were not on til late, which meant that I couldn’t see the whole gig, so not really fair to review it here. I have now seen them eight times over the last three years, whihc is more than I’ve seen any other band.

No, this post is about Amplifico the fabulous support band, who absolutely blew me away. My mate Dave, who I went with, reckons that Donna the lead singer has a touch of Kate Bush about her. KT Tunstall is apparently in awe of her voice-and she’s not the only one. Their set was an absolute joy from start to finish.

I’m kinda embarassed though, because I cannot write about Amplifico in as informed a way as I would like. I’m hoping they – or someone can get in touch with more information. They look very cool, and their bass player was supposedly playing his first gig with them last night, Wearing tails! and pulling it off. Their myspace says they are a three piece, though Scott seemed like very much part of the band.

I loved their sound and cannot wait to see them live again. I tried to buy some of their music today, but no-one seems to know if they’ve got anything out.

Anyway, here’s two mp3s from their MySpace. Check them out, and go and see them live, and make friends with them at their mySpace spot.

And please, someone let me know: What do they have out? Is Scott in the band? When is their debut album actually out, and on what label?

Amplifico-‘Just To Pause This.’ mp3