Natasha Khan, better known as Bat For Lashes, is shortly to release her third album, The Haunted Man on October 15.

Though not the first single from the album-which will apparently be premiered in late August -‘Laura’ is the first track to be released to the world from the album. Stream it below…

…and watch the video here.

The tracklisting for the album is as follows:
“Lilies”
“All Your Gold”
“Horses of the Sun”
“Oh Yeah”
“Laura”
“Winter Fields”
“The Haunted Man”
“Marilyn”
“A Wall”
“Rest Your Head”
“Deep Sea Diver”

She will also be playing live on the following dates: 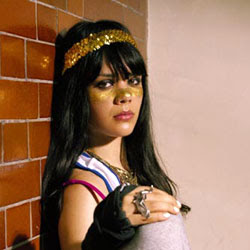 Where have I been? How come Bat For Lashes have barely registered on my radar until the last few days? God knows. Anyway…these are beautiful gorgeous songs that I am happy to welcome into my life.

Very brief post today as am stresses up to the eyeballs with way, way to much to do, and in desperate need of sleep. But I think these songs will be trying to keep me sane.