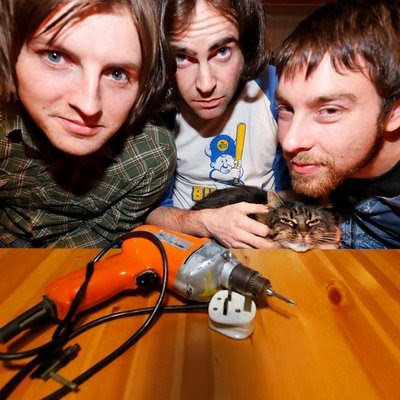 A night of three three pieces. First on the bill are Black Alley Screens who sound as loud as…and grab me pretty damn quickly. I’ve always thought three pieces seemed to have something, and these guys, who look almost young enough to be in my classroom, are fantastic. With songs like ‘Goodbye Youth Hello Proof’ I have decided by the third song that I’d sign them if I could. They are partly in the Arctic Monkeys/Libertines mould, but on their own terms.They exude the sort of cool that is effortless (either that, or they have been practising bloody hard to look that way). Considering I have never heard a note of their music before tonight I am utterly won over.

Which is more than I can say for the follow-up band, Fighting With Wire. Hailing from Derry, they have clearly been listening to At the Drive In, and trying to copy Dave Grohl’s vocal style. The previous night they played with Reverend and the Makers in Belfast, who they go to great lengths to criticise. They dedicate ‘Everyone Needs A Nemesis’ to them. As I write the review I find I can remember precious little about the music.

There’s a long wait for our headliners to come on. They will later claim that this is because drummer Jack William Egglestone was trimming his beard. This is quite believable. This Welsh three-piece, formed from the ashes of Jarcrew and McLusky released their debut album Curses last year. I can only admit to having heard it recently, but I’m glad I did. They manage the feat of cramming in loads of ideas, and yet making it fun and listenable, rather than worthy and unpalatable. It’s a hot and sweaty night (yes, we do occasionally have these in Scotland), and they know how to work a crowd. There’s a great sense of humour here too. When a heckler asks them to play ‘Wonderwall’, without missing a beat they ask for subtitles.

Whilst the slightly quirky nature of the songs means that you cannot even identify the lyrics from the booklet when you get back home, there’s no denying just how exciting and just sheer fun this is. Songs like ‘Fuck the Countryside Alliance’* and ‘The Lord Hates A Coward’ manage to be both angular and singalong. By the end of the gig, bassist Kelson has ended up in the crowd and prompted the best stage invasion I have seen since the fifteen minutes of The Others three and a hlaf years ago.

But these guys deserve to last and do so much better than Dominic masters’ almost forgotten crew. There’s something special brewing here. I’ve been playing the album loads since the gig. And even though I didn’t fall into bed until well after midnight, it was worth it.

Future Of The Left are currently on tour in the UK and will tour the US this autumn. Check their webpage and their MySpace for more details.