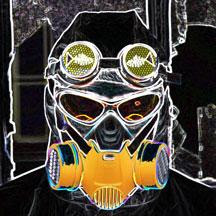 Who are Deadfisch? Well, it seems it depends who you ask…

The Professor and the Reverend met for the very first time one nuclear day in the resurrection bar of ‘Le Lion Blanc’ next to the toxic canal; the sky was magenta and the air full of hyperglymatrons.

The Professor was doodling on his organic megametapad and working out how to save the planet (for maximum personal profit) when the door swung open and the Reverend entered the silence-filled room.

Bored with the hermetic vacuum that enveloped the bar, the Professor turned to the wall and began idly hitting extremely wrong (but somehow right) notes on a forgotten piano in the corner of the forgotten room.

“Play me a blues in B flat” said the Reverend with his back to the room.

“I’ll play as flat as you like” said the Professor “but the only colour I know is orange”.

The reverend picked up his banjo and played.

Deadfisch is a music/art project fronted by Andy B.

It’s a first taste of a forthcoming contemporary anti-war concept album ‘Collateral Damage’ which encompasses an eclectic range of styles from club to rock to opera and follows the story of one young soldier. The album is due out in November to coincide with the US presidential elections, along with the follow up single ‘Collateral Damage (Big God)’.

Andy B was formerly an Art Director at Saatchi’s and has exhibited at the National Portrait Gallery. Fans of his music include Billy Bragg, who played a Deadfisch-designed guitar on the Southbank last year.

To coincide with the single release, a Deadfisch-designed surfboard will be auctioned for the charity ‘Military families against war’ in conjunction with a new company set up by Eden project sustainability director Chris Hines to produce the most environmentally sound surfboards in the world.

So there you have it. Andy B has graciously allowed 17 Seconds to put up this mp3. Download it, see what you think, and if you like it, obviously go and support them. And if you live in America, please use your vote wisely. Actually, wherever you live, use your vote.

The single should be out today on Random Ambient Jazz Recordings, cat no. random001.