Ok, yes, they have an expletive in their name. How cool/ shocking/contrived. Moving past that…this is the sophomore album by the Bristolian duo of Benjamin John Power and Andrew Hung who have built upon the promise of their debut album, Street Horrsing, released only last year.

The review of this album in The Wire magazine grumbled that when the album is on, you can’t think about anything else and when it’s finished, you’ve completely forgotten it. Well, when it’s on I love to ficus on it – and even before the album’s finished I can’t wait to play it again.

As championed by the Wire and other sources, there have been a number of acts of the last decade who have taken ideas of distortion and noise and gone places with them – see Battles, Yellow Swans, Liars, and Deerhunter for example. If you’ve never understood the beauty of the drone – I pity you – but here the drone goes down the rave-up. No, it’s not a startlingly original album (unless you’ve never ventured outside of top 40 radio), but this album represents the meeting point of the electronic drones of Neu!, the subversive experimentalism of the Aphex Twin and the sheer fun of classic rave.

And with tracks like the ‘The Lisbon Maru’, where ideas come in and gradually develop, this is great stuff. Not po-faced but fun. This year has seen the Animal Collective deservedly lauded for where they have gone with their Merriweather Post Pavilian album. And whilst this is never going to confront you in the way that the likes of, say the Hair Police, Wolf Eyes or Merzbow might, this is one of the best releases so far this year.

Tarot Sport is out now. 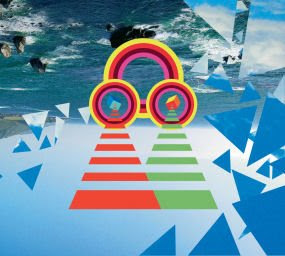 Some people might seem designed to commit commercial suicide. Such people might include Andrew Hung and Benjamin John Power. After all, will major record chains stock a record with that name? And what about the supermarkets?

Fortunately, most people who will enjoy this sort of music won’t be the sort of people who buy their music from major record chains or supermarkets. If you can look beyond the name, you’ll hear one of the best albums to be released this year so far (up there, for me, with Benga). Signed to the ATP label (All Tomorrow’s Parties -well, it wasn’t going to be a major, was it?), their record company label website states that ” Initially the group was born as an outlet for their nihilistic-noise tendencies but quickly, the two Fuck Buttons realised they could harness the use of noise as a tool to immerse and evoke. No longer afraid of melody or rhythm, the group started fusing all these elements to the point when drone becomes melody becomes rhythm.” And therein lies the wonderful side of this record. Sometimes evoking Four Tet, sometimes My Bloody Valentine, Sometimes Wolf Eyes, and sometimes all three of those acts at the same time, FB really do take noise to a place where it becomes beautiful, and this is an album to lose yourself in, as much to find yourself in. Whether you consider this avant-garde or commercial, that’s by the by. This is a record that needs and deserves to be heard, appreciated, enjoyed and lived with for a very long time.

I have tried hard not to issue many Five Star reviews to albums in the eighteen months plus I’ve been writing this blog. But the sheer amazement on hearing this album means it gets it hands down. Utterly astounding.

PLEASE NOTE: As always, if you like what you hear, please support the artists by buying the album, going to shows, telling friends etc..