I will be doing Christmas posts this year, as a precursor to this, here are Fucked Up and friends covering Band Aid’s ‘Do They Know It’s Christmas?’

According to Wikipedia,’In 2009, Toronto punk rock band Fucked Up released a version of the song, featuring vocals from GZA, Ezra Koenig of Vampire Weekend, Bob Mould of Hüsker Dü, Tegan and Sara, Yo La Tengo, Kevin Drew of Broken Social Scene, comedian David Cross, Andrew W.K. and Kyp Malone of TV on the Radio. The recording was financed using some of Fucked Up’s 2009 Polaris Music Prize award. The money received from purchasing the track from iTunes was split between three Canadian charity groups, Justice for Missing and Murdered Indigenous Women, DTES Power of Women Group, and Sisters in Spirit, all fighting to give voices to the murdered and missing aboriginal women who are being ignored by the police and governments.’

This free download is courtesy of epitonic (i.e. it’s legal).

Fucked Up -‘Do They Know It’s Christmas?’ mp3

The band with one of the (potentially) most offensive monockers in musical history return! Once you’ve got past the name (if you didn’t hear their excellent 2008 album Chemistry of Common Life, tut tut), you are really in for a treat.

The Canadian hardcore punk band still cling to the DiY ethics that they started out with. But the situation has moved on. This is a concept album; a rock opera set in a Fictional British town during the dark days of Margaret Thatcher’s premiership. Not many hardcore punk bands from anywhere tend to do that. I have no idea if this album will ever play as a west-end musical (I hope not). Ever. But I do know that this makes for a very impressive listen.

It’s divided into four acts as a lad called David meets a girl called Veronica, they fall in love and then she dies. David grieves and nearly loses his mind, believeing himself to be responsible.It becomes clear that it wasn’t his fault as other characters come forward to show the part they played…Stand out tracks on this album include ‘Queen Of Hearts,’ ‘The Other Shoe’, ‘Running On Nothing’ and ‘Ship Of Fools.’

If anyone still believes in 2011 that punk is one-dimensional then this album should silence them once and for all. A brave and very exciting album.

David Comes To Life is out now on Matador.

Fucked Up ‘Queen Of Hearts.’ mp3

Fucked Up ‘The Other Shoe.’ mp3

I’ve featured Fucked Up on here before now. They’ve done cover versions before (I have posted their EP which features covers of The Shop Assistants) and they have done a cover ‘Do they Know It’s Christmas?’ the Band Aid song that was a no.1 single in the UK (and many other countries) in 1994, 1989 and 2004. The song also features appearances by Yo La Tengo, RZA, Ezra Koenig of Vampire Weekend, Bob Mould, Andrew WK, TV On The Radio’s Kyp Malone, comedian David Cross and Kevin Drew of Broken Social Scene.

All proceeds from the single will be split between three charities: Justice for Missing and Murdered Indigenous Women, DTES Power of Women Group and Sisters in Spirit. 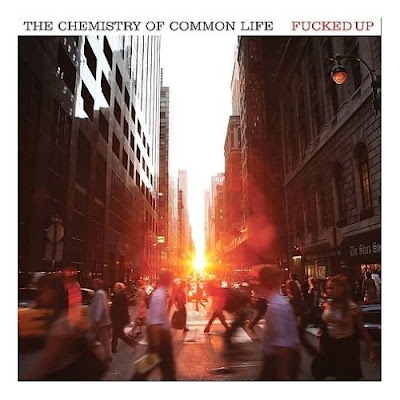 Fucked Up -‘The Chemistry Of Modern Life.’ (Matador).

And, damn it, Matador just keep on doing it! This is the second album from the Toronto band with the moniker unlikely to trouble daytime radio (at least in the UK, wheer we can be frightfull uptight and repressed about that sort of thing) and it just adds to the lebgthy list of great albums that the label have released this year. To say nothing of adding to a frighteningly long list of music released over the last half decade by the band themselves.

FU don’t have a myspace, which seems pretty damn radical and anti-establishment in 2008. Hell, to describe Fucked Up is to flail around for descriptions only to find that they’re far from water tight. They are a hardcore punk band, who have released tracks that are eighteen minutes long and used multitracking. Opener ‘Son The Father’ starts off with flutes, for goodness sake. If you think Hardcore means anti-melodic, short bursts of noise, and worthy but inaudible lyrics, then FU have come to change your perception on all of that. They’re punks at heart, but they bring punk, and hardcore punk at that, a reinvigorated feeling. This is an album that does not stop for breath, but contains as much invention as you could hope for from a Flaming Lips album.

Having made it onto the cover of NME and gained a fair amount of coverage, there will be no doubt those who scream sellout. (usually whilst funded by a trust fund). Each repeated play reveals something new. From it’s opener onwards, onto first single ‘No Epiphany’ and the closing title track, this album is sure to feature in many of the year’s best of lists. And it has earned its’ place.

The Chemistry Of Modern Life is out now on Matador. 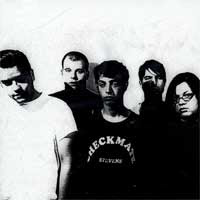 The band above is a Canadian punk band called Fucked Up. Given that I have posted a lot of Shop Assistants’ stuff of late over here (and a little bit more to come as well), Tom at Indie mp3 sent this over. See what you think…and thank you Tom.

Fucked Up (Manno Vocal) -‘I Don’t Wanna Be Friends With You.’ mp3

Fucked Up (Pinkeye Vocal) -‘I Don’t Wanna Be Friends With You.’ mp3