Ahead of the release of a second Go-Betweens boxset released this week, 17 Seconds tracks down mainman Robert Forster for a chat…

17 Seconds: Hi Robert! Great to talk with you. You’re about to release G Stands For Go-Betweens Volume 2, which kicks off with your fourth album as a band, Liberty Belle. Did this feel like a new chapter in the band’s story?

Robert Forster: Yes. We had learnt lessons, particularly from the rather rough and involved process of recording our third album ‘Spring Hill Fair’. The feeling in the group was, we have to take control of our recordings. We have to be ourselves. Sounds easy, but  can be hard to do under the pressures of the music business.

17S: You signed to Beggars Banquet at this time. Did this offer stability and did you feel a good fit for the label?

RF: They gave us stability, financially and in their enthusiasm for our music. We also enjoyed being signed to a label, that at the time, had a reputation as a ‘goth’ label. [Bauhaus, Gene Loves Jezebel, The Cult.]

17S: You were based in London at this point. How did you find living there – and where were you living? I’m assuming that after Australia the weather was terrible but what else did the city have to offer?

RF: Times were tough. Money was in very short supply, and the winters were long. We were there for our career and our proximity to Europe, which we loved touring.

17S: Amanda Brown (violin and oboe) joined the band in 1986. Is it true the band met her busking their songs in Sydney?

RF: No, she wasn’t busking. She was playing in a cafe with an old friend of ours from Brisbane, from the late seventies. They did a number of originals that our friend had written, and a version of ‘Draing The Pool For You’ that I had written. Amanda’s talent on the violin was immediately clear.

17S: Before recording 16 Lovers Lane the band returned to live in Australia. What impact did this have on the band as a unit and individuals?

RF: Sunshine. Ease of life. No more home sickness. Sense we had done our time in London and it had done our career and our music a service. And it was time to be in a new town. Bands need new things, new challenges to survive.

17S: What do you recall about the break-up of the band? Is there anything you would have done differently?

RF: Not really. The band had run its course. We were tired, in debt and unhappy. Grant told me he wanted to leave the band, and I told him I felt the same.

17S: Can you pick a favourite album and/or single from this period?

RF:Danger In The Past, my first solo album.

17S: Can you give us any clues about the third volume?

17S: Do you speak to any members of the band these days?

RF: Yes. I am in contact with all of them. We live in different cities around the world, but stay in touch.

17S: What music do you listen to now?

The tagline is Three Decades, Two Friends, One Band. And despite a number of band members over the years, the reality is that the Go-Betweens were the project of Robert Forster and Grant McLennan.

Written and directed by Kriv Stenders, the film takes a pretty linear approach, beginning with the two men meeting at college in Brisbane in 1975, and going up to the tragically young death of McLennan in 2006. It is actually pretty hard to find many faults with this documentary. Although two hours long, the film tells its story well-enough that it doesn’t feel that it is being fleshed out, rather that everything we need to know is within.

And it is actually pretty moving. Sure, fans of the band (and I’m proud to include myself in that description) know that the band could no longer continue with the death of McLennan, and as a result his death hangs heavily over the film. While the two men were great friends and responsible for some of the loveliest music ever made, there’s no doubt that they frustrated many of those they worked alongside. Long-term drummer Lindy Morrison and violinist/oboist Amanda Brown speak warmly of the band, and they are those most significant contributors here, after Forster but at times clearly found Grant and Robert hard to deal with. Like an indie version of Fleetwood Mac, there were intra-band relationships, and inevitably the strain of being critically acclaimed (but not selling many records), along with drink and drugs, would take their toll.

Perhaps for me the biggest fault is that when Grant and Robert made a comeback as the Go-Betweens in 2000, the utterly essential role of two-thirds of Sleater-Kinney is completely left out. But there are also baffling concerns as to why the band couldn’t make a commercial crossover, was it the succession of record companies, or that they were so focused on their art they couldn’t write to order? 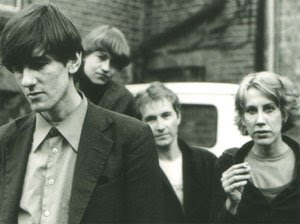 …the days are getting longer in every sense, and Spring seems to be here in Scotland too.

Along with the rain, but even then it doesn’t seem so bleak.

So how about a track from Australia’s second-greatest ever band?

And there’s a bank holiday coming up too. Great time of year for four day weeks…