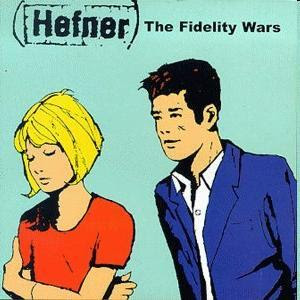 Coming hot on the heels of their debut LP, Breaking God’s Heart, this was hefner’s sophomore release in 1999. In British indie terms, it was pretty damn successful: four songs from it made John Peel’s annual Festive Fifty chart that year (and they had nos.2 and 3), and it gave them an indie chart no.1 in both the LPs and the singles (‘Hymn For The Cigarettes’). So how does it stand up nine years on?

Pretty damn well, in fact. Over the eleven songs, Hefner remind you that they are one of the bands that got away. And we shouldn’t have let them (though Hayman Watkins Trout and Lee, Darren Hayman’s latest project, are pretty good in their own way). Maybe if the blogosphere had been up and running ten years previously, they would have developed their cult staus more. We can but speculate. For, on listening once again, the lyrics show that they really were on a parallel with Morrissey and Half man Half Biscuit for being caustic, and pretty funny with it too. And they had great tunes as well. They called several of their songs Hymns for things they loved (‘Alcohol’ ‘Cigarettes’ ‘The Things We Didn’t Do.’ I was always waiting for one to the Beach Boys, but it never came).

The package is a double, including the eleven original tracks, the five fantastic tracks that make up The Hefner Heart EP, and another twenty four tracks that include b-sides, four track recordings and rehearsal versions (personally I would have preferred to see the three Peel sessions they recorded that year, but I’m notoriously picky). Though this can be a lot to take in in one sitting, Disc 1, with the aforementioned EP and sophomore album is a joy.

The Fidelity Wars was re-issued on Belka records on June 2.

Hefner -‘The Hymn For the Cigarettes.’ mp3

The video for ‘I took Her Love For Granted.’ Bizarre body stockings ahoy!