Ah…1993. It did feel like revolution was in the air, even to those of us isolated from so much, living for a glimpse into an alternative reality provided by reading NME (it used to be more radical, honest) and listening to John Peel. I read George Orwell’s Keep The Aspidistra Flying and it changed my life, making me question the politics that I’d accepted. ‘Every intelligent boy of sexiteen is a socialist’ it says. Some of us idealistic 32 year olds still try to hang onto that.

In just a couple of years bands from the ‘indie/’alternative’ spectrum would take on the charts, and it seemed like a victory until a certain lad’s mag started seeming to make it okay to be a lad (for which read lager lout, and sneering at anyone who attempted to stick up for oppressed minorities). Girl power ultimately became more synonymous with the Spice Girls, but for a while, there were many female fronted bands who would terrify the bejaysus out of everyone. That is, they pointed out that guys groping girls at gigs was not on (believe me, I wouldn’t have), and that there was still a lot of misogyny going on in the music business, and indeed in life in general. The school I was at refused to let girls wear trousers; quite why they weren’t challenging this I don’t know, and the female staff were not confronting the powers that be about it either). Looking at John Peel’s Festive Fifty for that year, the amount of female-fronted bands who gave the impression that they were going to kick a lot of backsides was quite a force to be reckoned with, and they hailed from both sides of the Atlantic: Hole (before they signed to Geffen), Voodoo Queens, P J Harvey- and Huggy Bear.

Huggy Bear are perhaps now best remembered for an episode when they caused chaos on TV show The Word. Some people seem to remember The Word as being this era-defining show, I don’t know that it was (though a few years later, a version of it was sanitised, presented as teatime entertainment and called TFI Friday. oh, come on, you KNOW I’m right). Having performed their song ‘Herjazz’ (which I’d heard on John Peel, natch, along with Cornershop), they were not amused about “a report on 2 American models who called themselves “the Barbi Twins”. Huggy Bear and their fans became upset at this and started shouting at the show’s noticeably uncomfortable presenter Terry Christian. They were violently ejected from the studio and a spokesperson for The Word later said that one of the band’s friends had “bit the face of a member of our production team.” The performance was given a Melody Maker cover story, the event being compared to the Sex Pistols’ Bill Grundy incident.” (This seems to be quoted verbatim about the internet; hence why it is in quote marks; they are not my words and I am not sure who to credit*). I missed the performance, but the fact that it happened seemed pretty radical. As did the rumour of them playing women only gigs, though it appears that they only did two, one with Bikini Kill and one with Hole. This led to discussions about whether this was discrimination, and there was a fair amount of attacking the girls on the grounds that they couldn’t play their instruments. ‘Scuse me?! Yup, this was nearly two decades after punnk, and people were still coming out with this tripe.

Alas, the promised revolution never happened. The band broke up in 1995. As to whether there wasn’t an influence going on, I beg to differ, ever so politely: Sleeper, Echobelly and Skunk Anansie may have had more commercial success over the following years, and may have been less overtly feminist, but they continued to challenge the traditionally misogynistic and sexist ideas about women just being there to look front the bands and look pretty. And Riot Grrl, as it was known, has had a far longer lasting influence than the so-called ‘New Wave of New Wave.’ **

I’d never forgotten them, though I couldn’t get my hands on the 7″ at the time. Then yesterday, a mere sixteen years later I found it (and yes, in a plastic bag, not a proper sleeve. Proper indie, kids). It still has the power:

…and because I think they belong with this post

* It is possibly Grrrls: Viva Rock Divas by Amy Raphael

** I should admit, though, that I do still have a copy of the mini-album by S*M*A*S*H 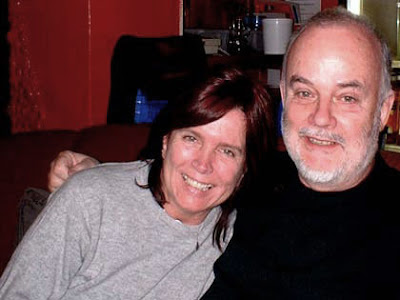 John Peel and his wife Sheila, affectionately known as The Pig

I’m glad that quite a few people have been enjoying these Peel posts. I won’t be doing these forever, or I may take a different approach to these, but for the time being, I will do a few more Festive Fifty posts (the only annoying thing about them is just how long they take to do!)

First up, a band who have evolved constantly over the last thirty years, even if they only released five studio albums and one compilation in that time. It’s hard to imagine it not being worth the wait, though. Green Gartside and his merry men:

One of the most heartbreaking bands ever, with surprisingly their only festive fifty entry:

Morrissey had many entries in the Festive Fifty with the Smiths and for the first few years of his solo career, quite a few too. This was the last of his:

Underworld only ever had two entries in the Festive Fifty, no surprise that this epic track was one of them.

Over the place of a decade, John Peel gave a lot of coverage to Cornershop. This was their final entry.

An aching anthem about being an outsider…and this time, Morrissey wasn’t the singer

As mentioned previously, The Wedding Present were up there with The Smiths and The Fall in terms of entries. This is my favourite song of theirs to make the Festive Fifty

Rather like Blur, Radiohead actually seemed to do better on the Festive fifty further into their career than earlier on:

And finally, mad, and wonderful -Spizzenergi:

Have a good Friday!