It’s funny to think how long Los Campesinos! have been around for. As my +1 for the gig comments, they still seem like they’re a new band on the scene -until you realise that actually, with the release of Hello Sadness last year, they are now actually on their fourth album.

And while the Liquid Rooms isn’t sold out, nevertheless, there’s a pretty decent-sized crowd at the Liquid Rooms tonight. And watching the quite young crowd, it’s clear that Los Campesinos! do inspire devotion in fans, that there are most certaonly a number of people who do know all the words.

The reception to the title track of their new album demonstrates not just what high regard the band are held in, but also how good the band are at writing anthems. Anthems in their own image, perhaps, but anthems, none the less. And there’s a huge number of songs in their back catalogue (get yourself over to Spotify before heading off to your local record store) that you ought to know, dammit. ‘Letters From Me To Charlotte.’ ‘We are beautiful, we are doomed.’ ‘Songs about your girlfriend,’ their current single, inspires another massclapalong. ‘You! Me! Dancing!’ perhaps their best known song threatens to raise the roof.

And when Gareth Campesinos! (they all take the same surname) launches himself into the crowd during the encore of ‘Sweet Dreams, Sweet Cheeks’, security may be shimmering with displeasure but the crowd love it.

Although still seen by many as a twee-pop act -and there’s still enough of that element to their music in 2012 -there’s a sense in which Los Campesinos! are continuing to grow -and getting ever cheekier. A great deal of fun for one night out. 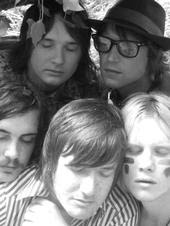 Ok, OK, am going to try and listen to something up beat and uplifting and try and get a sense of perspective. Here in the northern hemisphere, it is the last day of winter (even if it is trying to snow in certain parts of the UK!, and it cannot come a moment too soon!

First up, Tiny Dancers (picture above) who make me want to jig around the flat – and that’s really very welcome. currently on tour, this band, who have been described as a mix of ‘Country, Sheffield blues, Beatlesque rock’roll and Neil young’s creaking sadness’ have just put put a single called ‘I Will Wait For You’ which you need to hear, and can do at their MySpace page. Then you can go out and buy it, preferably on the two 7″ singles that are available (multi-formatting is cool when it’s on vinyl. When it’s on CD or DVD I just feel like I’m being taken advantage of).

Next up, another band who have just put put a single – this time available on 8″ vinyl (try putting a cd that’s 6″ into your player. they won’t make it and you won’t find anything that will play it. Vinyl is the future, people!!) the Rumble Strips remind me of the kaiser Chiefs, Blur circa Modern Life Is Rubbish, and particularly Dexys Midnight runners – not just because of the horns, but also because the singer’s voice is pleasantly similar to Kevin Rowland’s. Go to the MySpace page to hear the track and three others, then go and buy the single.

Finally, the slightly demented sounding Los Campesinos have made their single ‘We throw parties, you Throw Knives’/’Don’t Tell Me To Do The Maths’ available for free as a downlaod and that includes the artwork. It’s not a free 7″ that you can pick up but it is pretty cool. Get yourself over to their website to get it: