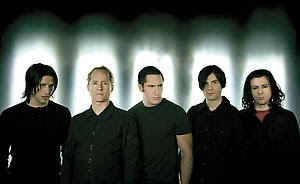 Following on from Radiohead, The Charlatans, and Pennywise, Nine Inch Nails have made their album available for free via the internet. Increasingly, this seems to be the way forward. But, once this very twenty-first century method of distribution (which makes cottage industries seem almost conservative by comparison) is out of the way, is the album any good?

I’ve got to be honest, I had sort of tuned out on Nine Inch Nails a while back. Don’t get me wrong; as a sixteen year old I thought Pretty Hate Machine a work of genius, and couldn’t wait to hear The Downward Spiral, having lapped up the Broken and Fixed EPs in the meantime. The soundtrack he assembled for Natural Born Killers is one of the finest ever, leaving Pulp Fiction and Reservoir Dogs standing. Then sometime in the late nineties I’d got onto and into other things, and lost interest a bit. Last summer they supported The Foo Fighters in Edinburgh, and it was a reminder of why I’d been so impressed by Trent Reznor and his not-very-merry men in the first place.

The fact is that, into his forties, Reznor does Angst and Atmosphere extremely well. Lest we forget, he produced Marilyn Manson’s Antichrist Superstar LP, thus turning Manson into a bigger star than him in the first place, but he still has an edge. Whereas Manson took Alice Cooper’s template and ran with it, Reznor is the more thoughful, watchful older brother. There is still an element of nosie and industrial influences on here, as shown on opener ‘999,999’ but Reznor has not forgotten tunes, and these are here in abundance, particularly ‘1,000,000’ and ‘Discipline.’

If you didn’t like Nine Inch Nails before this may not change your mind, but if you ever felt that there was something else there, that you wanted to peer closer into the abyss you will find this a rewarding listen.

The album can be downloaded for free at the Nine Inch Nails website. A physical release will follow shortly.

OK, so Stadium gigs can be deeply impersonal, full of people trying to get drunk who have no idea about the music other than they want to hear the hits…but you might actually have a chance of going rather than if they are playing a ‘club’ gig.

It’s strange to think Nine Inch Nails emerged at the end of the eighties and are still with us. Once I’ve found somewhere to stand in the crowd and not get rubbish sound, the strength and diversity of their ideas starts to come through. It probably helps that they are playing in the early evening on an overcast day in Scotland, as watching them in blazing sunshine would be wrong. Whilst it was be great to hear some stuff off Pretty Hate Machine, Trent Reznor and his merrier-than-you-might-think men, pack a powerful punch, without descending to dreary self-loathing. A final blast of ‘Wish’ and they are gone.

Some bands can do stadiums with style, not so much in terms of an all-singing, all-dancing show but how they can work it. The Foo Fighters know how to work a crowd, and when Dave walks on by himself and launches into a gorgeous solo version of ‘Everlong’ joined by the band for the final chorus, it’s a very good start to the night. Especially when the next songs are ‘Monkey Wrench,’ ‘Times Like These,’ ‘My Hero’ and ‘Break Out’.

One of the most impressive songs of the night is the workout that ‘Stacked Actors’ gets. Solos, meeting the audience-and yet neverself-indulgent. Perhaps this is the key to the Foo fighters deservedly enduring success for more than a decade -they are crowd-pleasing band with an expanding back catalogue who still sound like they have not forgotten their roots. ‘DOA’ ‘Generator’ ‘This Is a Call’ -how many aces can one band hold up their collective sleeve? The live version of ‘Best Of You’ sounds achingly sad, far more moving than on record.

After a final encore of ‘All My Life’ we take our leave, and go out into the night. (…and I go into school and rub it into all the kids who couldn’t get tickets… : )

Nine Inch Nails -‘Head Like A Hole.’ mp3 (They didn’t play this, I wish they had)