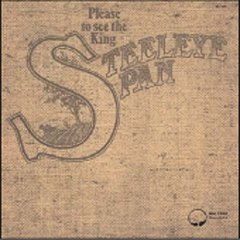 Like a lot of people, for years my main inpression of Steeleye Span was hits like ‘Gaudete’ (one of only two songs ever sung in Latin to make the UK Top 50, the other being Sadness Pt.1 by Enigma) and ‘All Around My Hat.’

But like so many bands before and after, this was only part of the story. The band’s second album Please To See The King, released in 1971, featured not only ex-Fairport Convention member Ashley Hutchings and Maddy Prior’s dulcet tones and Tin Hart, but also new recruits Peter Knight on mandolin and folk legend Martin Carthy on guitar. There were no drums on the album but there was invention aplenty. The Wire 282 highlights this as one of the great English psychedelic folk albums, as folk’s main players proved they were as capable of being forward-thinking as Miles Davis or The Beatles.

Hear these and enjoy: