After a couple of years away, Stellastarr* have returned with a new album Civilized, from which rather excellent new single ‘Graffiti Eyes’ comes, which sees LCD Soundsystem meeting the B52s. Well, that’s what it sounds like to these old ears, anyway.

The single is out to download soon* and can be streamed at their myspace or you can watch the clip above.

They have also made this mp3 from the album available for free – give it a listen and let me know what you think!

* I had understood it was available already, but it isn’t. Silly me. Apologies. 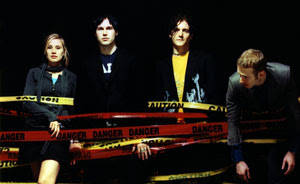 NME have brought it to the world’s attention that there is a rather fine new track from Stellastarr* called Warchild over at their MySpace page. Listening to this and other tracks reminds me just how good they are. A new album is due sometime this year.

Get yourself over there, check it out and then go buy yourself some Stellastarr* here

Meanwhile, having been nosing around several online record stores the other day, I am pleased to remind you of the existence of two tracks you have to hear. One is a classic debut from 1990, the other an overlooked gem from last year:

This can be heard on Teenage Fanclub’s A Catholic Education album. Buy here.

Their official website is here and they have a MySpace here

This can be found on their album the Invisible Deck, which can be bought here or you can get a lovely 7″version here. Their official website is here and their MySpace is here.

Now; I’ve said it before and I’ll say it again: if you like the tracks you here; GO AND BUY THEM and support the artists involved (see them in concert, get the records etc..) It’s only fair. The record companies may, especially if large conglomerates, be out to rip people off, but these are generally wonderful, hard-working people trying to make a living.

Speaking of supporting hard-working people, I have been hugely enjoying the Complete Peel Sessions by The Fall, which was one of my Christmas presents. It horrifies me to think that there might be people out there who haven’t heard of The Fall, so -courtesy of Insound here is a Classic, which can be found on the rather wonderful 50,000 Fall Fans Can’t Be Wrong compilation which is an excellent primer to their work 1978-2003:

(NB Couldn’t find a MySpace for the Fall. Somehow, I’m not surprised…)