So, it’s six days to go to Christmas, and you’re still wondering what to get various family and friends for Christmas. The head of a banker on a plate? Tempting. The heads of David Cameron and Gordon Brown? Maybe, maybe. Simon Cowell’s soul? You can’t buy what doesn’t exist. Or was it sold for thirty pieces of silver many years ago?

Anyway…confessions of a justified snipper aside, why not bear in mind these great presents from the scottish music scene, as stocking fillers or whatever, depending on your budgets and generosity?

First up, Avalanche Records have put together a rather fine compilation that retails for just £5 of excellent scottish bands doing Christmas songs. It does include our very own X-Lion Tamer doing a song called ‘Little Drum Machine Boy’ (no, not the one that Beck was doing that still does the rounds on the internet). As Tony T said himself, it’s nice to be competing with the big boys. The tracklisting is as follows.

If you can’t get to Edinburgh why not order it here?

The Withered Hand single has also been made available as a free download (if you give free downloads as a christmas present you are taking Presbyterianism to frightening levels) so why not check it out if you still haven’t?

Meanwhile, Meursault made one of last year’s best albums in Pissing On Bonfires/ Kissing With Tongues. This year has seen them release the excellent Nothing Broke EP and also two 7″ singles “William Henry Miller Pt.1” and er, “William Henry Miller Pt. 2” You can buy the 7″s individually for £3 or together for £5. These can be found at Avalanche or ordered direct from Song By Toad Records here…

…as indeed can the excellent six track EP Matter by Jesus H. Foxx, which I have frothed about many times and which includes this excellent track:

I’m still kicking myself for not having managed to see eagleowl yet -they have just released a stunning single ‘Sleep the Winter’/’Laughter’ which I have played incessantly. Their debut EP For The Thoughts You Never Had appears to have sold out, though I have seen a copy in Avalanche. The 7″ is beautifully packaged and worth every penny of the £4 or so. See here or here.

This year has seen amazing debuts from many Scottish bands, all of whom should be on your Christmas present list – or on the list of things you thought you’d get other people. This should include the self-titled albums from both The Gothenburg Address and There Will Be Fireworks.

There Will Be Fireworks -‘Foreign Thoughts.’ mp3

Chemikal Underground continue to amaze all as ever, with their debuts from The Phantom band Checkmate Savage and Lord Cut-Glass’ self-titled debut (AKA Alun Woodward from the Delgados)

And if you’re still searching for more ideas for the music fan in your life, check the Scottish BaMS list (of which i am proud to be one!) here on Peenko, where we were asked for our views on the best albums of 2009 or indeed my own best of year list. 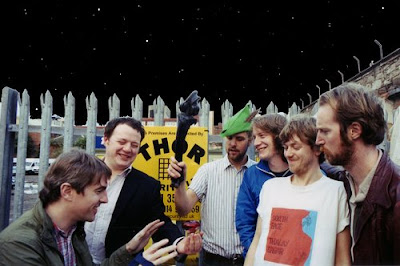 Already the PR companies ( those who haven’t tried to stuff blogs, that is) are gearing up to promote 2009’s big releases.

As a big fan of scottish indie, the fact that Checkmate Savage, the debut LP from The Phantom band will be out at the end of January on Chemikal Underground.

It was recorded at Chem 19, the Delgados’ legendary studio, and features Paul Savage from Scotland’s Greatest Ever Band in the role of producer, engineer, and guiding force. It was also recorded at Franz Frdinand’s studio in Govan.

Whilst i have turned my nose up at some ridiculous press releases that have crossed the threshold of 17 Seconds Towers in the past the description of ‘Beefheart meets Bonnie ‘Prince’ Billy, Neu! meets Nick Cave’ might actually be pretty accurate on the basis of what I have heard so far.