It was a film scripted by Barry Hines (of A Kestrel For A Knave/Kes) fame, about a nuclear bomb being dropped on Sheffield.

It was very good, seriously bloody scary and hugely influential on me. I saw it at school -and when I was teaching and used it I found it had lost none of its’ power on me, or those I was teaching. ‘How could anyone think nuclear weapons were a good idea?’ said the stunned students. I was actually asked not to use the film after a while, my head of department was getting nervous…

This song ‘Final Day’ is only ninety seconds long, even shorter than ‘Velocity Girl,’ but if you got any of the fear of living through the cold war, I guess you realsied you were not going to have long to reflect on nuclear annihilation:

Welsh band Young Marble Giants were a short-lived but awesome band and this song was covered a few years back by belle & Sebastian:

Update: Just reminded by the editor of Is This Music? of this classic: 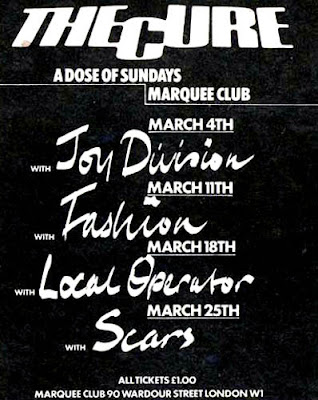 Talk about gigs you wish you had been to. Imagine seeing the Cure and Joy Division on the same bill. For a Pound. *Sigh*

Or getting to see Edinburgh The Scars with The Cure.

Still, I have seen the Cure five times over the years, so I cannot complain.

This Scars track was not on their re-issued Author! Author! album last year, but seems to be much in demand, so here goes:

The Scars’ Myspace is here 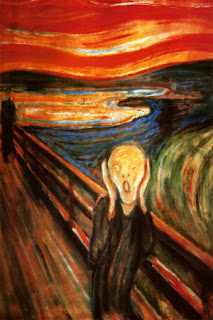 Hi people, and happy Saturday to you, and happy St. Patrick’s Day, if you celebrate it, too! The Vinyl Villain has posted some good stuff by Irish acts.

I meanwhile have spent Saturday very agreeably, not doing anything connected with work, but instead working on the wedding list, record shopping and going to see Hot Fuzz. Completely over the top, ridiculous, silly…and all the better for it. I was told by my better three-quarters when we left the cinema that she hadn’t seen me looking so happy in ages.

The record shopping brought much pleasure (shopping in Avalanche in Edinburgh usually does) including The Scars’ re-issued ‘Author! Author’. If you have never heard The Scars before, they were a legendary Edinburgh post-punk band, around the same time as The Fire Engines, Josef K, the Prats and The Associates. Their MySpace is here and a website is here. One track, ‘Your attention Please’ is earily reminiscent of the 1980s film Threads about a Nuclear Bomb being dropped on Sheffield. (Scripted by Barry Hines who was responsible for Kes, you have to see it. It may be dated, but the shock value is still there). I had been made aware of this Scars release by Manic Pop Thrills who has also been very complimentary about me today on his blog.

As I type, the soundtrack is provided by another ‘friend’ on Myspace, Kevin Rowland and Dexys. The demo of a track called It’s OK Johanna must be heard, if you haven’t already. I seem to have been a real late comer to Dexys (other than ‘that’ song), but once you have heard it, it’s definitely up there with the best stuff from his career, which can be heard by buying this album here.

Have a nice weekend