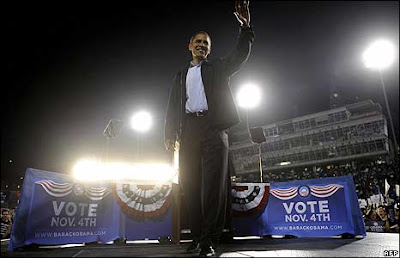 Alright, so I can’t vote in the US Presidential Elections.

But that doesn’t mean I can’t have an opinion on it. To any people who do have the option, please vote, and vote wisely. The President of the USA effectively has a massive impact on the rest of the world, in the way that being say, President of Ireland or Prime Minister of Australia just doesn’t have (or First Minister of Scotland, for that matter).

You know Obama is the right choice. And if anyone thinks someone non-American should’t be commenting, just remember how much impact a certain Australian has had on British politics for many years.

Here’s a song I thought was appropriate, and by the sounds of it, as been misunderstood and misappropriated for longer than Springsteen’s ‘Born In The USA.’

Woody Guthrie -‘This Land Is your land.’ mp3

And remember: if you don’t vote, don’t bitch.

I’m playing the Yo Majesty LP, in the hope it will be the soundtrack of a brighter tomorrow…