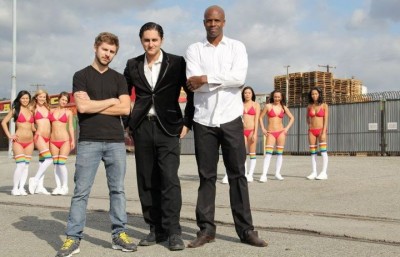 Hugely impressed by their EP, The Flash, I asked LA’s FEVR PITCH if they’d be happy to speak to 17 Seconds.

Very, as it turns out…

Mark: I’m Mark Okoh, from London – make beats and do production. My background is in photography, but started making music about three years ago.

Kill Paris: I’m 25, I’m single. I come from some random place in the Midwest. I usually am the primary the sound designer, last in the factory line process, last at the bar, and longest lasting generally speaking.

Marty: Born and raised in L.A. and I’ve been playing in bands and playing instruments since I was 12, so I come from the most traditional background of the three of us I suppose. Playing in rock/funk/soul bands, busking the city streets, and producing/engineering for other pop/rock artists.

17 Seconds: How did FEVR PITCH come together?

Marty: Initially FEVR PITCH was just Mark and I – with Kill Paris living on the east coast and occasionally collaborating with us. Eventually we decided to fly him out to LA, and like a bad romance novel, there was instant chemistry. The three of us lived together for an ultra sketchy week of debauchery and occasional songwriting. We wrote a total of 7 songs, 4 of which were released as The Flash EP. Kill Paris finally came to his senses and realized he must move permanently to Los Angeles. The city would never be the same…

17 Seconds: Mark, how did you come up with the concept for the the video for ‘Running Away?’ ‘And how long did it take to make?

The Running Away video was inspired by an old Monty Python sketch, where a guy who is about to be executed, has chosen to die by being chased by a group of topless women. We considered having the girls in our video topless, but logistically it would have been too difficult, though it may have bumped-up our youtube views =). Shot over two days, around LA.

17 Seconds: Do you play live as a group? If so, how do you approach live performance?

Yep – it’s unique in that it’s a mixture of a DJ set and a live instrumental performance. Three laptops, and a boatload of instruments! We try to keep it eclectic and different than your typical DJ set.

17 Seconds: This is to each of you: what are the records (and other sources) that have most influenced you?

Mark: Discovery by Daft Punk, Vespertine by Bjork (Corey has a tattoo of the album cover..,), Moon Safari by Air, Fist of God by MSTKRFT, Demon Days by Gorillaz, Oracular Spectacular by MGMT, Blue Monday by New Order, ‘Looking for the Perfect Bea’t by Afrika Bambaataa, 4×4=12 by Deadmau5, Ni Silico by Pendulum, Blue Lines by Massive Attack

Kill Paris: what he said, also… And the Glass Handed Kites by Meu

Marty: Just As I Am by Bill Withers, Night at the Opera by Queen, Blood Sugar Sex Magik by RHCP, Thriller by Michael Jackson, What’s Going On by Marvin Gaye, Nevermind by Nirvana

17 Seconds: As well as FEVR PITCH, what other projects (if any!) are you currently involved in?

Mark: Always working on solo material – if it doesn’t fit the FEVR PITCH mold, I keep it for myself!

Marty: I have one other project which is a soulful rock band, Bravesoul (www.bravesoulofficial.com). We just put out a new EP in December, produced by Mikal Blue (Jason Mraz, One Republic, etc.).

17 Seconds: Who – if anyone – do you consider to be your contemporaries on the music scene?

We’ve been compared to many different artists who use a mix of electro/dubstep along with a strong vocal presence, including Daft Punk, Gorillaz, MGMT, MSTRKRFT, Pendulum, Dada Life, Nero, Magnetic Man…

17 Seconds: How do you approach writing songs as a group?

ALL: In general Kill Paris or Mark will start a beat, and then that beat gets passed to Marty who will start writing topline lyrics and melodies. We tend to approach song concepts and general arrangements together as a group before lyrics are completely finished, and we all have a hand in layering tracks and adding new sections.

17 Seconds: What are your plans for future releases? Will we get an album this year?

ALL: You’ll get a whole load of new songs starting in January – we have a plan to release a new single every week for 5 weeks straight. We put so much into each track that it’s hard to release an album and have people only listen to the first half, so the strategy is to continuously release tracks for the next few months single by single. It also helps us keep in constant touch with fans! At some point this year however we do plan to release a full album, most likely including a few of our favorite singles as well.

Fighting For Nobody by FEVRPITCH

…and yes, those capital letters are intentional.

This popped into my inbox a little while ago. FEVR PITCH are an LA-based electro/dubstep group consisting of Marty Rod (singer/songwriter/multi-instrumentalist), British dance producer Mark Okah (who also directed the video below) and Dubstep, drumpstep DJ/producer/remixer extraordinaire Kill Paris (possibly not his real name).

Their rather awesome EP The Flash EP, was released in October – and thus alas, is too late for consideration in my end of year lists for 2011.

Not that that should stop you checking this out, because it’s really rather fine. All four tracks stand alone in their own right, and make for a proper EP (as opposed to some ‘great, good song now let’s cobble some crap to go alongside it’ approach). In as encouraging way as possible, I think if you enjoy MGMT and Animal Collective and music in that vein, I think this EP will appeal to you. I’m loving this – and hoping to hear more from the band sometime very, very soon.

Stream the EP below. If you like it – go and buy it!

The Flash EP by FEVRPITCH

This is the video for the lead track on the EP, called ‘Running Away.’ More than just a little bit cool, I think you’ll agree.