Foals have announced the release of their fourth album, What Went Down, which will be released on August 28.

The album artwork and tracklisting can be seen below:

You can stream the incendiary title track below…

…and watch the very good, if rather disturbing (hey, this is Foals after all) video for ‘What Went Down’ here:

Nearly halfway into the year, and I’m hoping that Foals’ Holy Fire will get its just rewards in the end of year polls.

A few months after the jaw-dropping ‘Late Night’ video, here is the video for the latest single ‘Bad Habit’

…and remember, NSFW is ‘not suitable for work!’

You can read my review of Holy Fire here

Foals have just revealed their new video for ‘Late Night’ the third single to be taken from their latest album Holy Fire.

Very dark and disturbing, an artistic with it, the video – rightly- carries a parental warning before it starts, so if you don’t want to see a music video that looks at birth, life and death, with everything (including lots of blood and sex), do not watch it.

However, it is a fantastic piece of work…

So, six weeks into 2013, there’s every sign that this is going to be a phenomenal year for music, right? And one of the most anticipated albums of the year was Foals’ third album, Holy Fire. This album is already out, it’s debuted at no.2 in the proper album chart- so is there any point in me writing about it?

Well…yes. Because the reality is that Foals have made their best album yet, and if I can persuade anyone else out there that they ought to check them out, then it will be worth it. There will be those who still file Foals under the ‘just another indie band’ but Foals have never been just another landfill guitar group. Their debut Antidotes showed them to be more indebted to acts like Shellac and Four Tet than say Oasis and The Libertines.

And on Holy Fire, Foals show that they can do anthemic, but entirely on their own terms. the album is bookended by ‘Prelude’ and ‘Moon’ and inbetween, the band are pretty much firing on all cylinders. The singles ‘Inhaler’ and ‘My Number’ give an idea of what you might expect, but this is more than an album just cobbled together to support a couple of tracks.

This is an album that hopefully will take the band to a new level of recognition, whilst still remaining true to themselves.

Holy Fire is out now on Transgressive 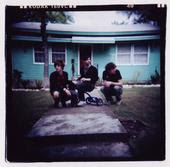 Christmas is over, and it’s time to look ahead to what’s going to be big. I can no more rub a crystal ball than anyone else can (well, except the people who have crystal balls, I suppose), but there’s things bubbling away that suggest 2008 could be just as good as 2007.

Bands like Foals. I’d heard bits and pieces over 2007, and they’d kinda joined the list of bands that I knew i ought to get round to writing about very soon, if only other things didn’t keep getting in th way. Anyway, these guys dropped out of university at Oxford after a year (no idea where in Oxford) and set about making some extremely exciting danceable stuff. And their forthcoming album Antidotes is getting people just as excited about what is getting left off as getting put on it.

Give these a listen and see what you think…

Foals’ MySpace is here and their official website is here

Let me know what you think…