John Peel at home. I know how he feels (and not just about the fact that there is a need for all that music to be transportable)

…yes, it has been quiet for the last few days here. Mrs. 17 Seconds and I headed down south to London to catch up with friends and family (not that the two are mutually exclusive, you understand). I love visiting London, but boy does it bring home to me that Scotland is home.

Anyway, we are now back, and glad to be reunited with our cats, who have been, once again, been looked after by Ken from Aberfeldy, who is a legend.

There will be more posts here (including a review of the forthcoming debut from Wake the President) very soon. In the meantime, I had the journey from King’s Cross back to Edinburgh soundtracked by the 1980 Festive Fifty (all, um 65 tracks of it).

So here are two tracks… 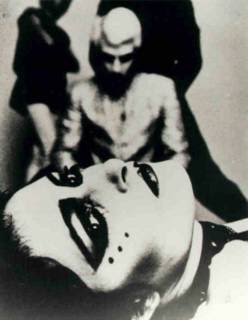 These six tracks were indeed all featured in John Peel’s Festive Fifty in the early eighties, but I’m not doing this as a John Peel post per se, just fancied sharing some great music wih you, as it makes it from the vinyl to the iPod.

Is there such a thing as the best best-of ever? The Jam’s Snap! must surely be a contender…

One of my many, many planned posts for the future is one Pete Wylie and the 7,000 faces of Wah!

It’s odd to think that goth was once tagged ‘positive punk’ in NME, and that the tag was only applied to music (there were certainly gothic sounding music long before that, as far back as Mozart’s Requiem, IMHO). So often it seems ot be used as a tag of insult or abuse, erroneously as far as I’m concerned. Certainly, many bands who came out of punk seemed to have a foot in the goth camp, to say nothing of a following.

The Damned’s Machine Gun Etiquette is where they started to get gothic, and where this track comes from, though The Black Album was surprise, surprise, even more so…

The curious-sounding ‘Hong Kong Garden’ with its’ wonderful eastern overtones was a great debut single, even if the lyrics seem a little close to novelty at times.* But it was on their albums that the dark heart of this particularly gorgeous and mesmerising creature lurked, as shown on these tracks from The Scream and Join Hands. Then two years later there was Juju…

Siouxsie and the Banshees -‘Switch.’ mp3 (from The Scream)

Siouxsie and the Banshees -‘Icon.’ mp3