There are, doubtless, some people who feel I shouldn’t blog about Coldplay. They have been phenomenally successful, and probably come the closest to doing a U2 (i.e. coming from a very, very slightly leftfield tradition and gone on to sell millions of records and committing the cardinal sin of selling music to people who don’t usually buy music) than any other act. Why should a blog cover them when it will be featured everywhere? However, I’ve always liked them, and whilst it’s perfectly fair to slag off a band if you feel they make rubbish records, it’s pathetic to slag them off just because they’re successful.

This May they will release their sixth album. It’s entitled Ghost Stories and it’s out on May 19.

This is the first track to premiere from the album last week, which is uncharacteristic of Coldplay (though the band have worked with Brian Eno several times, and his influence is all over this track). This is called ‘Midnight.’

This track will be the first single proper from the album, entitled ‘Magic.’

Of the two tracks I’m more impressed with ‘Midnight’. Certainly, there will be those who sneer that it’s Coldplay and it will just sound like them. But if you’re open to challenging your prejudices why not give it a try?

The tracklisting for the album is as follows:

As Christmas approaches, are you dreading who might be the Christmas no.1?

Last year, Rage Against The Machine managed to stop X-Factor’s Joe McElderry getting to no.1, and we had the delightful reality of an angry song with no less than 17 expletives getting to No.1. Is this childish? Well, if you think that the word ‘fuck’ is more offensive than the music industry being held to ransom by Simon Cowell, than that’s a matter for your conscience.

It might, on the other hand, be Coldplay who are due to return with their fifth album next year, and that’s a much more attractive proposition, IMHO opinion. The Christmas song has had a revival in recent years (the Killers have done no less than 3) and this is another fine addition to the canon.

BONUS: this is a cover that Coldplay did of the Pretenders’ hardy Christmas perennial ‘2000 Miles.’

Of course it doesn’t, stupid. What were you expecting?

It’s probably fair to say that Coldplay are perhaps the band that really truly did become the next U2. From basic beginnings (and like U2, not sociologically humble ones), they toured like crazy, both in the UK, and more importantly, the US. Wheras it took U2 most of the eighties and five albums to get to the status of U2 that they’ve occupied, well, pretty much ever since, it took Coldplay three albums tops. Like U2, they got Brian Eno in to produce their fourth album. Like U2, it’s pretty much a given that each new release will go straight to no.1 in the UK, the US and well, anywhere really. They’re mega successful. No wonder some people hate them.

And sometimes I find people expect me to be one of them. That being a successful band means that you must therefore be despised by bloggers isn’t something that I think is fair. Obviously if you’re successful and rubbish, that’s not great, but it’s been like that long since before the arrival of the music business as we know it. The fact is, I bought Coldplay’s ‘Blue Room EP’ on 12″ single at the tail end of 1999, saw the band accelerate, and accelerate and not really stop since then. I’ve seen them live several times – the first two occasions at summer festivals in the summer of 2000 when they were on the bill in the middle of the afternoon. Subsequently they’ve been headlining enormo-gigs, not just in the UK but the US too, reaching the populace in a way that it might have been predicted that Blur, Oasis and Radiohead might do, but Coldplay actually did. Four massive selling-albums, a marriage to an A-list actress for the singer…but still some great tunes.

So Coldplay aren’t sonic innovators, and U2 and Radiohead have attempted to drag leftfield ideas into the mainstream, and I still wonder what another album with Brian Eno at the help will produce. But there is some difference between Parachutes and Viva La Vida, and it’s not just the matter of eight years. The sound has got bigger, and from X&Y there were always little subtleties.

As a live album, it’s fun and not a rehash of greatest hits (only three of the tracks on here were singles), and predictably heaviest on the last two albums. ‘Fix You’ and ‘Viva La Vida’ are massed singalongs, though ‘Clocks’ seems a little hesitant. The sound is good, and it seems like a genuinely live recording, though to what extent it’s been touched up it’s not necessarily possible for me to identify.

It’s not a classic live album, like Thin Lizzy’s Live and Dangerous, but there are many worse ones out there I could name (The Cure’s Show, David Bowie’s David Live, probably one or two of The Fall’s many…), it’s probably comparable with…U2’s Under A Blood Red Sky. Which is where we came in, more or less. And it’s a free giveaway, so they can hardly be accused of being ‘rockist’ which they undoubtedly would if it were 1979 and not 2009… 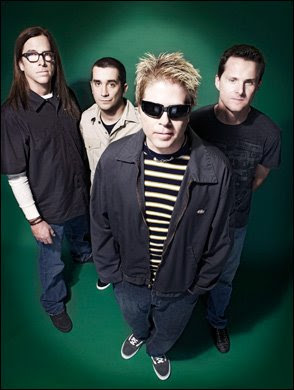 The majors have obviously woken up to free music.

This track was ‘released’ by the Offspring a few days ago. Now, I kinda preferred them in about 1995 (circa Smash) to what they went on to do, though it was great to see them break the Top 10 in the UK. This track is from their forthcoming album entitled Rise And Fall, Rage And Grace.

Meanwhile, free music has seen an interesting development here in the UK. I don’t know how it’s working out in the rest of the world, but 7″ vinyl singles have become progressively more popular once again over the last four years (the NME voiced the theory that it was to do with the ‘impersonal’ nature of mp3s). Whatever the reason, it’s great. Even more impressive is the fact that the NME have over the last year or so started giving away free 7″s. Last year there was The White Stripes and Babyshambles; this very day it’s Coldplay. The ‘A-side’ is the ‘Violet Hill’ track I posted a couple of days ago, and the b-side ‘unavailable elsewhere’ is this: 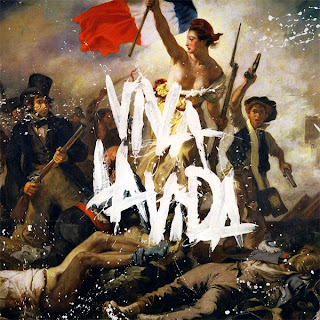 …in which two hotly anticipated albums of 2008 make tracks available for free via their website. Glad to see record companies are finally waking up to this.

Firstly, CSS’ new LP Donkey is due out soon, and this track is entitled ‘Rat is Dead (Rage).’ mp3

Meanwhile, Coldplay’s Viva La Vida is due out in June. I stand by liking Coldplay. Sure there are loads of godawful bands who have missed the subtleties of Coldplay (I’m perfectly serious; if you can’t hear them, then that kind of proves the point, doesn’t it?) and attempted to cash-in. I first got into them in 1999 when they released the Blue Room EP and have enjoyed them ever since. Remember: Nirvana shouldn’t be blamed for Nickleback, nor should Green Day be blamed for Sum 41and Blink 182.