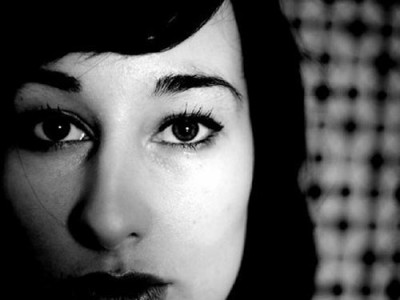 It’s been a while since I featured Zola Jesus on this blog (my inability to cope with emails, certainly not hers) and yet within a few seconds of starting to stream this track, I knew I had to feature it on the blog. I first heard her when she did ‘Sea Talk’ which was no.3 in my annual Festive Fifty back in 2010.

It’s called ‘Nail’ and it’s the latest track to be taken from her album Taiga (out now on Mute). It’s beautiful, and I sorta like the video too (even if it does encapsulate the thought of suffocating).

Take the necessary three and a half minutes to enjoy this.

Wisconsin always seems to have had a bad press as a US state, not least from Americans. Even nebraska doesn’t get that much flak, possibly because there’s a Springsteen album named after it, or something. Oh, and Conor Oberst comes from there, so that’s enough to get the indie hipsters frothing.

Anyhow, straight out of Madison, Wisconsin comes one Nika Rosa Danilova. I can’t believe I haven’t heard her music before now, but I’m smitten and I want to gorge myself on it. Her latest single ‘Sea Talk’ is phenomenal – imagine Joy Division’s ‘Atmosphere’ meeting This Mortal Coil’s cover of ‘Song To The Siren.’ No doubt the hipsters will be all over her like a rash before you can say Pitchfork, Spin and stereogum, but when something’s as good as this, nothing must be allowed to spoil it. People are even mentioning her in the same breath as Kate Bush-and I don’t want to shoot them for heresy.

This is taken from her forthcoming album Stridulum II. I will be investigating further. If I did a single of the week, this would win hands down.

If you’re as smitten as I am, check out more free legal music here.