I’ve hinted at it before, but next week I will start four weeks of having my own radio show on Edinburgh’s local student radio statio, Fresh Air.

I was very flattered to be approached by them, to do something during the festival, so I’m going to do the best I possibly can. I will be going out on the airwaves (or whatever you call them when it’s an internet radio station) on Thursday August 5, 12, 19 and 26 between 7 and 8:30 pm (UK time; if you’re wanting to listen to this elsewhere, you’ll need to work out the time difference).

It goes without saying that I will be supporting local acts, and I’ve already worked out what the first track I want to play is (and no, it’s not an act on 17 Seconds Records, past or present!) I’m trying to finalise some live music and hopefully some more guests. I am also hoping to feature some unsigned acts, so if you read this and would like me to consider playing your music, please get in touch via the email on the right. Amongst features I am planning are ‘gone but not forgotten’ (you guessed it -a band or act no longer with us), album of the month (already decided) and quite possibly a cover version related one as well.

And if I can get it sorted, I’ll be updating the blog as I go!

For today, a fine band who are gone, but most definitely not forgotten around here:

The greatest radio DJ ever. FACT.

Ah…1991. School was rubbish, the UK got involved in a war in Iraq (plus ca change la meme chose etc..) and the UK recession bit. How times change. Bryan Adams was no.1 for sixteen weeks with the theme for a film about Robin Hood that showed Kevin Costner doing an appalling English accent -‘Robin Hood: Prince Of Thieves.’ Music, yet again, would save us. Depending on what got through, of course. Bizarrely, songs not played during the time of the Gulf War were ‘Saturday Night’s Alright For Fighting’ by Elton John, the Bangles ‘Walk Like An Egyptian’ and Lulu’s ‘Boom-bang-a-bang.’ The Cure’s ‘Killing An Arab’ didn’t make the blacklist though. In the middle of all this, there was the incongruous sight of the Clash getting a no.1 with the re-issued ‘Should I Stay or Should I Go?’

I have to admit, this track didn’t do much for me in 1991, but over the course of the decade, it and parent album Blue Lines grew on me. It was actually credited to Massive, rather than Massive Attack, being as the name was considered inappropriate at the time of the Gulf War. This track is without a doubt my favourite track of the last twenty years.

A few weeks ago, a twelve year old started trying to tell me abuot when Nirvana first appeared on Top of the Pops. ‘You don’t have to tell me,’ I explained ‘I was watching it, I know!’ But that’s the thing: for my generation he was the one who pushed open the door for alternative music into the mainstream; for another generation after us, he’s an icon of doomed youth. Perhaps it’s how people in their fourties feel when i ask them about their experiences of the punk days. Ah well…

Hello to shoegazing (part 1). Curve were one of those names I would gaze it in the indie chart each week, wondering how I could even get to hear their music -the likelihood of hearing it on daytime Radio 1 was slim, and I had no access to MTV, and filesharing meant something different in 1991. Eventually I heard them – bought a cassette single of ‘Coast Is Clear’ and was not disappointed. This was the debut single though, featuring the man who held the record for many years for being the world’s fastest rapper – ‘JC 001.’

In which the world of shoegazing meets goth (see also the Cocteau Twins). By 1991, Siouxsie and the Banshees were pretty much the elder statesmenandwoman of the ‘indie-alternative’ spectrum, but I still carried a torch for them that I had done since I saw ‘Candyman’ as a nineyear old on Top of the Pops. This song was prime Banshees, even if parent album Superstition wasn’t. As shoegazing and baggy battled it out (well, sorta), the instrumental break seemed to bear more than a passing resemblance to Chapterhouse’s single of the same time ‘Pearl.’

Siouxsie and the Banshees -‘Kiss Them For Me.’

It’s a truth not generally acknowledged that there was a successful pre-Britpop indie scene, that dind’t involve Shoegazing necessarily, but did make it onto Top Of The Pops, Smash Hits and quite often daytime Radio 1. The Wonderstuff were one of those bands, along with Pop Will Eat Itself, Ned’s Atomic Dustbin, Jesus Jones, Carter the Unstoppable Sex Machine who often did rather well. This was their biggest hit as band (not involving covers and Vic Reeves).

Wonderstuff -‘Size Of A Cow.’

This song got me from the off: ‘Says she won;t be forced against her will/says she don’t do drugs but she does the pill.’ sufficiently parent-baiting, I hoped. I still have a spot for the Fanclub but I kinda preferred them when they were mashing up Big Star and Dinsoaur Jr, rather than the Neil Young of the scottish west coast which started setting in about 1997.

It has been said about many of the pre-britpop bands that they made more money selling T-shirts than records, but they did have hits too. This song got Carter onto the Smash Hits Poll Winners Party in October 1991. The show might have passed off without incident had host Philip Schofield then muttred an insensitive gag about thier haircuts…see “>here. heh heh…My little brother and I were there, having won tickets, and we sorta saw it, but it was only completely clear when we got home and wathced the video afterwards…

Carter The Unstoppable Sex Machine -‘After The watershed (Early Learning The Hard Way).

*Would be here also: REM -‘Losing My Religion’; Billy Bragg ‘Sexuality.’ Problems with what is available on YouTube at the moment. 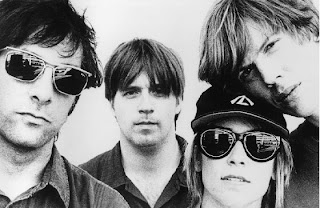 First up, one of those genuinely life-changing bands, Sonic Youth. The first album of theirs I heard was Goo, and while this may be indie heresy, I even prefer it to Daydream Nation (a few years ago, I played in a band with the working name of Daydream Nation. Our bassist hated it, and it transpired there is already a band of that name. Oh well). Never understood how ‘Dirty Boots’ from Goo didn;t make that year’s Festive Fifty, though…

Does anyone else think this is a bit similar to ‘Kiss Them For Me’ by Siouxsie and the Banshees, which came out about the same time? Either way, cool record.

‘I wanna die…I wanna die…’ Nowadays, a fifteen year old would embrace/shun this track for being ’emo’ with that lyric. But when it came out, I was fifteen, had never heard the word emo, and just thought it was drop dead cool. more than cood be said for me at the time.

Fast forward to 1998, Britpop has gone down the plughole, and Norman Cook has yet another rebirth. This still makes me dance, really badly, mind…

As I near to my 500th post, there will be more weird and wonderful music here. Watch this space…