As lead singer of Echo and the Bunnymen, Ian McCulloch has been responsible for some of the greatest music of the last thirty years. Ocean Rain, the Bunnymen’s fourth album from 1984 is in my all time top five (along with Revolver, Disintegration,Low and Parallel Lines). He has also produced three solo albums so far – Candleland, Mysterio and Slideling (I rate the man’s music but I think I’d rather gloss over his reading of ‘September Song’ released as a single in 1984).

Anyway, ‘Mac the mouth’ as he was dubbed in the 1980s is shortly to release his fourth solo album, Holy Ghosts, a package of two albums within one. This will be released on April 22. The first one is a live album, recorded in May 2012 at London’s Union Chapel (nice venue, I once saw The Delgados playing there with Six By Seven, back in the midsts of time) which features Ian Broudie on guitar and was produced by Youth, Mac keeping his post-punk links going. The second disc is his fourth solo album Pro Patria Mori. *

The version of ‘Bring On The Dancing Horses’ sounds lovely.

Meanwhile, I was certainly pretty excited to learn that Echo and the Bunnymen are on a co-headlining tour with James next month:

I have seen both acts live several times – and even in big venues they still kick ass!

* Just in case you have even less Latin than I ‘Dulce et decorum est pro patria mori’ – ‘it is sweet and right to die for your country.’

I still swear by Ocean Rain as one of the best album’s ever made…even if I couldn’t get into The Fountain last year.

For some of the records on here, I could have written pages and pages about how these albums make me feel.

This seems to be the exception…because the music seems to speak for itself. It’s goth, Jim, but not as you know it. Strings that could grace a classical recording, beautifully scored.

One of England’s greatest ever bands reaching their peak.

An album I picked up cheaply on vinyl on holiday in Holland in 1994…that became my second favourite album of the eighties after Disintegration…Ian McCulloch AKA Mac the Mouth giving in fully to the temptation to ape Scott Walker and doing it wonderfully..the line about ‘screaming from beneath the waves’ on the title track…the fact that all nine tracks are amazing…’The Killing Moon’…’Nocturnal me’…’Seven Seas’…that cover…the greatest title track ever…

Lay down thy raincoat and groove. 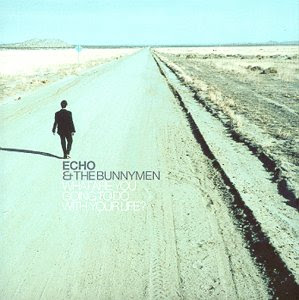 In 1997, Echo and the Bunnymen reformed, having split up almost ten years previously.

OK, maybe I should qualify that. Singer Ian McCulloch had left for a solo career in 1988, and drummer Pete de Freitas had died in a motorbike accident in 1989. The following year, an album credited to Echo and The Bunnymen (featuring vocalist Noel Burke, drummer Damon Reece and Jake Brockman on keys, as well as Les Pattinson and Will Sergeant) called Reverberation had been released. Both Colin at And before The First Kiss and Mike at Manic Pop Thrills have posted tracks from this oddity in the Bunnymen cannon in the last few months.

In 1994, Will Sergeant and Ian McCulloch reunited, as Electrafixion, before reuniing with Les to release Evergreen in 1997. Their first album in ten years as Echo and the Bunnymen, it was a huge success critically and commercially, and they were welcomed back with open arms.

Two years later, they released the follow up What Are You Going To Do With Your Life? This got some good reviews, a hit single (Rust reached no.23 in the UK), but somehow didn’t connect with people the way that its predecessor had. It has not been written out of history, in the same way that Reverberation has, but seems to have slipped below the radar.

This is a shame, for it’s a beautiful album, that as the iTunes review I checked a few minutes ago says, the sort of record post-punk bands should be making twenty years in. Not trading on past glories (you can imagine the record company wanting an album of ‘The Cutter’ and ‘The Killing Moon’ re-writes) nor trying to be trendy (an accusation that has been levelled at Evergreen, whihc I thinnk is a far inferior album). It is a reflective album, but no musical equivalent of an expanding waistlinie in middle-age here. It’s a comparatively short album in the CD age (clocking in at 38 minutes) that reflects and accepts its’ place.

It has been described as a McCulloch solo abum, somewhat unfairly. Pattinson plays on ‘Fools Like Us’ only (he was, perhaps understandably, more concerned with a legal battle for access to his kids). Perhaps the photos dwell on McCulloch a lot more than Segeant, but this is very much a Bunnymen record in sound. It also features the Fun Lovin’ Criminals -hang on, come back- whose contributions actually add a deft touch to ‘Get In The Car’ and ‘When It All Blows Over.’

Maybe this struck a chord, being released with just a few months to go til my first degree finished, and not entirely sure what was next. But this is an album I love. Sure it’s not as good as Ocean Rain, but this deserves to be seen as more than just a footnote in the Bunnymen’s nearly thirty year career.

Echo and the Bunnymen-‘What are You Going To Do With Your Life?’ mp3

Echo and the Bunnymen-‘Rust.’ mp3

I cannot see a listing for this on Amazon, but try your local record shop, and it is still available on iTunes.

Enjoy, these will be up for one week only.

for some reason, despite several attemots to relaod these, they are not coming up.

Will try and repost as soon as I can work out what the problem is.

For some reason, ‘Goth’ still seems to unnerve some people. This says more about them than it does about Goth music and Goth culture itself. It continues to throw up great bands and songs (and some dreadful ones too!), as well as debates as to who was goth or not. (siouxsie claiming she wasn’t is a bit laughable).