First things first – am I the only one to see the pun in the album title? Tim Booth has spoken about how the death of both his mother and his best friend in quick succession influenced this album – although it is actually an incredibly uplifting song. But interestingly, La Petite Mort is also a French euphemism for orgasm.

But it’s not a smutty euphemism, nor is it a miserable album. The jaw-dropping video for ‘Moving On’ – entirely constructed of string gives an insight into how James are still firing on all cylinders this far into their career. Sure, they took a break for six years in the last decade, but when they reformed, they were both amazing live and and on record. Whilst some bands reform for the money, James seem to be doing it for their art and making new music that adds to their already impressive legacy (Blondie, I hope you’re taking note).

And the opening three song salvo of ‘Walk Like You,’ ‘Curse Curs’ and ‘Moving On’ is a pretty amazing run. Ever since the CD player made it easier for people to simply skip through album tracks and the download age made it easier for people to just cherry pick the songs they wanted, that really counts for something. It’s a record that not only holds up well against their first post-reformation album Hey Ma but also against the early run of albums in the nineties that included Gold Mother, Seven and Laid.

Long may they run.

The legendary James return with a new album La Petite Mort, due out on June 2.

The video for the single ‘Moving On’ is animated and consists entirely of pieces of string…come back. It is actually a very profound and moving meditation on birth, life and death – you’ll have to watch it right the way through. This is genuinely one of the most amazing and moving music videos I have ever seen. Please take the time to watch it.

As a bonus, here’s the video for the album track ‘Frozen Britain’ 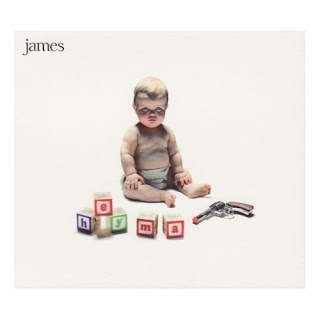 Blimey. Having seen James back in action at Glasgow’s Academy, I knew they were in fine form live. So I was looking forward to hearing this album. Having played it six times since it arrived less than forty-eight hours ago, I’m finally sitting down to write the review.

First of all, the lineup that recorded the legendary Gold Mother album – probably James’ high point creatively so far, is back on this album.Tim Booth, Jim Glennie, Larry Gott, Saul Davies, Mark Hunter and Dave Baynton-Power are back with trumpeter Andy Diagram whose presence is all over this album in the most glorious way possible. Rather like Radiohead would find a couple of years’ later with ‘Creep,’ James’ biggest hit single ‘Sit Down’in 1991 became an albatross around the band’s collective neck and they refused to play it live for a time. But they produced many fine singles (‘She’s a Star’) and albums (Laid, Millionnaires) afterwards. Like U2, James went on to work with Brian Eno producing them, who helped them to produce genuinely brilliant atmospheric tracks ‘uplifting songs about insecurity, disaffection and mental illness.’ They split in 2001, but solo albums and an appearance by lead singer Tim Booth in 2006’s the Manchester Passion later, here they are.

And what an album. Over half a dozen albums -couldn’t tear myself away -I’ve fallen in love, head over heels with this album. Over the course of eleven songs, from opener ‘Bubbles’ to closer ‘I Wanna Go Home’ the album never lets up for a second. Many artists of both songs can’t write convincingly about their children (and Lennon & McCartney weren’t infallible here either), but Bubbles manages to do that. Title track ‘Hey Ma’ with it’s jaunty ‘Hey ma the boys in body bags’ is jaunty and uplifting – James were always quite political, and then as now you don’t have to look below the surface. Alas, it’s probably too political to be a single (by which I mean Radio won’t play it, and the record company wouldn’t support them, rather than that singles shouldn’t be political).

Approximately 45 minutes long, the album never dips, and not a single track feels like filler. The lyrics are sad at times, but the Booth humour is back too ‘My mum says I look like Yul Brynner – too old for Hamlet too young for Lear* on Whiteboy.

Was I swept away? No, I’ve played it three times today already, made a friend listen to it too, and he agrees. James are back -and how.

Make friends at their MySpace

* In the unlikely event you don’t know what this refers to, may I suggest you read more

OK, I should probably start by being honest and admit that I managed to get slightly lost in Glasgow’s one-way system driving over, so we only caught the last three songs of The Twang’s set. Maybe it’s being the other side of thirty now, but I have reached the stage where just because a band have made it onto the cover of the NME does not mean I assume any longer that they must be any good. However, the three songs I heard I liked. They seem to know how to work a crowd, who were into proceedings, and that’s no mean feat for a crowd, many of whom could have been almost twice The Twnag’s age. The soon to be Mrs. 17 seconds described them as being like a slowed down acid house, though they are definitely a rock band.

When James come on, and kick straight into Come Home, it isn’t that it’s like they’ve never been away, but we’re reminded why we fell for them all those years ago. All the memories come back: the James’ t-shirts with flowers on them (note to younger readers; there was a time when bands like James and their contemporaries were known as T-shirt bands because they seemed to sell more T-shirts than records). Tim Booth has shaved his head but before I managed to have my view shut out by folk way taller than I, he has lost none of his charisma.

The band have a new greatest hits coming out shortly, but the sheer magic of the back catalogue was not forgotten last night in Glasgow. ‘Sit Down’ may have seemed almost like an albatross around their necks at one point – just as Radiohead found with ‘Creep’ a couple of years but they have so many other amazing songs. They never reached the commercial heights of U2 – though I seem to recall them playing a headline gig at Alton Towers amusement Park in England, circa the Seven album in 1992 – but their anthems certainly matched them. Some songs get gentle reworking, like the gentle lullaby version of ‘She’s A Star’ which is stripped of it’s swagger but not it’s aching beautiful sadness. Even the non-single tracks that get aired, like Gold Mother can bring the mostly over thirties shuffling around the baking hot Academy.

Comeback tours can feel like shameless exercises in nostalgia to pay half a dozen people’s mortgages. This was not one of those nights. The passion remains, the joy returns and the warmth lingers. And Tim Booth can still do the falsetto on ‘Laid.’ Come and sing your heart out. I just hope you’re not overcome by the venue’s heat like I was…